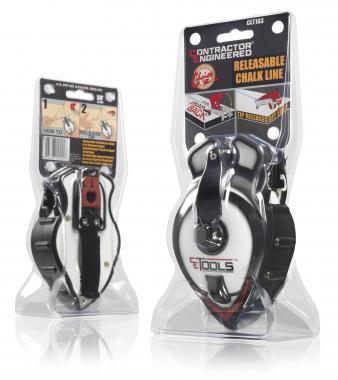 Being a newcomer to the hardware market, CE Tools had formidable competition to face. How do you stand out from the major players with a common tool, such as a chalk line? First, you re-invent the tool itself, to make it the world’s first of its kind with a self-releasing tip. Second, you add competitive features such a rubberized grip and an oversized gear system. And third, you need innovative packaging to brand yourself against the well-known names.

CE Tools launched their unique tool in 2018 using another packaging vendor. Although the market responded favorably, CE Tools knew they could do better. Their problem? They had an uncommon product in a common package. CE Tools needed an innovative package design to really give their new chalk line the stage presence it deserved on the store shelf.

CE Tools approached several packaging companies with design ‘must haves’ including 1.) a sleek and stylish profile and 2.) an exposed portion so consumers could actually feel the rubberized grip. No vendor thought it was possible.

Then they contacted Rohrer and the response was, “Let’s work together on this.” Dan Lemcke, President/CEO of CE Tools stated that this started his “dream team” comprised of his own creative director and Rohrer.

CE Tools presented Rohrer with CAD drawings, and Rohrer suggested a trifold clamshell securing the product between two hinged sheets of 15mil PVC. The flanges could either be heat-sealed or snapped together. A clamshell could also provide custom molding to follow the unique profile of the product and offer hanging or standalone merchandising options. Additionally, it would allow for the mandatory open space. Rohrer had developed smaller exposed areas before, but CE Tools required a larger area. Rohrer’s solution was an inverted trifold with manual snaps and outside seams. This “reverse clamshell” allowed for the larger open space, while providing a snug fit to showcase its contours. From there, production was green lit with a six-month turnaround. 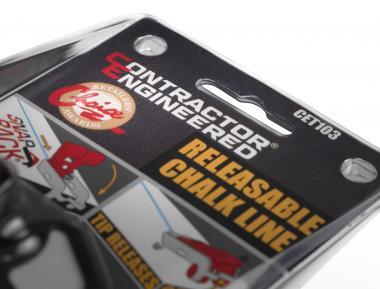 The product re-entered the market at the worst possible time – in the early spring of the pandemic. And yet, sales doubled.

The only difference was Rohrer’s “out-of-the-box” package. CE Tools has also reported major savings in warehousing, equipment and shipping costs. No heat-sealing equipment was needed because product and package could be manually snapped together. And it’s smaller – taking up less space. The true success story was the open collaboration between the two companies. As Dan Lemcke stated, “Everyone respected each other’s ideas and skill sets. This is so important when designing something new.” CE Tools found the right vendor in Rohrer who proved that thinking outside the box is more than just a cliché…it means approaching problems in new, innovative ways.